This websites use cookies. By continuing to browse the site you are agreeing to our use of cookies.
Accept More information
FFree Tracked UK Delivery on orders over £25
Important coronavirus information
GContact us

We offer a range of high quality, high potency probiotics that have been shown in scientific studies to be stable, effective in the gut and acid resistant. Our industry-leading LAB4 complex can be found in the majority of our probiotic products, and consists of 2 specific strains of Lactobacillus acidophilus with Bifidobacterium bifidum and Bifidobacterium lactis. We also use other well-researched strains in specific combinations when clinically required.

As probiotic bacteria have different attributes, it’s important you consider a product with well-characterised strains, ensuring the bacteria have been correctly identified and have a proven safety record.

What’s really in it?
Proper strain identification is essential to ensure the research about benefits is valid. A recent EU study concluded that 28% of probiotic strains were misidentified by manufacturers and so inexact labelling of strains is a very real issue.

Avoid non-human strain bacteria or yeasts
which are conceptually unsound and can be dangerous in immunocompromised individuals. The stated positive effects of S. boulardii are also arguably less generalised with little evidence of a beneficial effect on immunity and similar positive results can often be obtained with certain human strain probiotics.

Multistrain
Although we can isolate hundreds of different bacteria from human stools, it doesn’t follow that using multiple bacteria will offer a health benefit. If you are considering a multiple strain product, ensure the bacteria are well-characterised, safe, human strain, and are known to have a beneficial effect in the human gut in that particular combination. Furthermore in unproven multistrain products the bacteria may be antagonistic to each other and may alter the gut flora in an undesirable way.

Stability:
Ensure the probiotic you use contains the stated dose at end of shelf life. Good probiotics need to be kept in the fridge to maintain potency. If a product states that refrigeration is not required, the stated potency has either been reduced to allow for storage at higher temperatures (and is therefore less potent than it could be) or the product does not guarantee potency at end of shelf life. Avoid probiotics in ‘activated liquid’ form as these are less stable and more prone to deterioration. Freeze dried probiotics have a much higher degree of viability.

Prebiotics:
Many studies have shown the preferential effects of prebiotics on the status of good bacteria in the gut. Using prebiotics like F.O.S. preferentially increases the ratio of good to bad bacteria and can dramatically potentiate the effect of the probiotic. Therefore ‘synbiotic’ products, where both pre and probiotics are used together, are the preferred form. The claim by some that F.O.S. feeds bad bacteria is a myth as in every scientific study the effect of F.O.S. is overwhelmingly to increase probiotic bacteria and to reduce, or at least not increase, potential pathogens like Candida albicans. e-coli, clostridium and klebsiella

Clinically Effective:
Finally, and most importantly, is there any research associated with the combination and if so how good is it? Many probiotic manufacturers claim research support for their products, but the quality of the studies is sometimes lacking. There are numerous products stating beneficial effects on conditions like IBS, but when the data is examined the studies are often very small scale or require expensive long term supplementation to deliver the claimed effects.

Question what you ADVISE!

BioCare® Probiotics what sets us apart

Activity - assessed in clinical trials of around 850 individuals, across 5 different conditions.

Innovation - 25 years experience, evolving products and bespoke formulations to meet the needs of every age from neonate to the elderly.

Safety - in a published study over 2 years of 225 pregnant women and their babies.

Effectiveness - in 7 peer reviewed published papers with 85+ citations. Many probiotics have not been investigated in any human clinical trials at all or can take 3 months to show a benefit compared to placebo.

BioCare® ‘LAB4’ blend of probiotics has been used extensively in several well-designed and high profile clinical trials showing benefits for some of the negative effects of antibiotic use.

Supplementation with LAB4 probiotics helped maintain the balance of the gut microflora following 7 days of antibiotic therapy and reduced the overgrowth of Coliforms, Enterococci and Staphylococcus aureus. 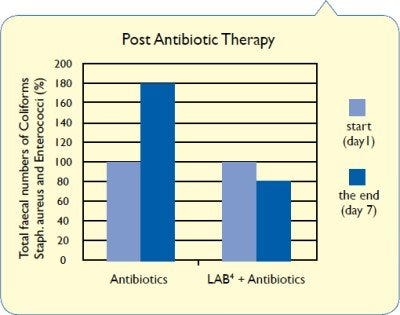 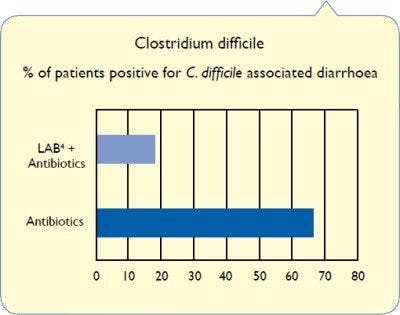 52 people diagnosed with IBS divided into two groups. One group supplemented daily for 8 weeks with LAB4. Second group took a placebo. IBS symptoms assessed every two weeks during the study period and at 10 weeks. LAB4 significantly reduced the total IBS symptoms in the subjects compared to those taking the placebo. 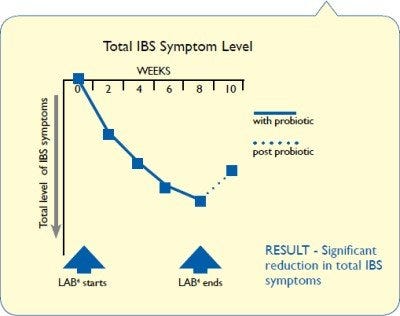 This was a large, well-designed longitudinal study that confirms the theory that specific probiotics given during infancy can prevent allergy in children and hence potentially reduce the lifelong incidence of the condition.

454 mother/baby pairs took part in the trial. Half of the mothers took the 10 billion of the LAB4B probiotic per day during the last trimester and then gave the same probiotic to their newborn babies every day for 6 months following birth.

The primary author, Prof. Steve Allen concluded the following as the key message of the trial... 'Lactobacilli and Bifidobacteria administered to pregnant women and infants aged 0-6 months prevented atopic sensitization and atopic eczema’ 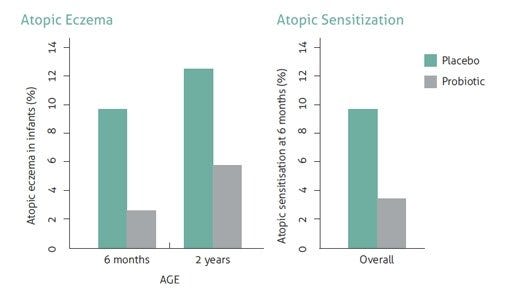 Sign Up For Our Latest News & Offers
© 2020 BioCare Ltd. All Rights Reserved. Company No. 01948434 By providing your email address you agree to our Privacy Policy, as well as opting in to receive information via email about our latest news, events, health articles, product information and exclusive offers and promotions
Customer ServicesClose
About
Quick Links
Our Website
Recently ViewedClose
FavouritesClose
Contact UsClose
Customer Services If you have any queries regarding BioCare products, recent orders or the website, please feel free to contact us.
We are available by phone between Monday - Friday 8.30am - 5.00pm. +44(0)121 433 3727
customerservice@biocare.co.uk
Clinical Nutrition For specific nutritional and supplement enquiries, please contact clinical nutrition between Monday - Friday 9.00am - 5.00pm. +44(0)121 433 8702
clinicalnutrition@biocare.co.uk
Education If you have a question regarding an upcoming practitioner/retailer event or webinar please contact education between Monday - Friday 9.00am - 5.00pm. +44(0)121 433 8774
education@biocare.co.uk